An introduction from Rev. Meg Riley:

Rev. Terri is on vacation this week.  In her stead, we share these words, which were a public Facebook post from Carin Mrotz, Executive Director at Jewish Action Center.  The synagogue referenced is Shir Tikvah, which for decades has gathered in the building at 50th and Girard which used to house First Universalist Church. Plenty for us UUs to think about!

This evening, I attended the rally in South Minneapolis at the site of the murder of George Floyd. The crowd, when I was there, was peaceful. A woman wove through socially distanced protestors handing out free masks to those who needed them, though everyone I saw was wearing their own. A tall black man was spraying the ground at our feet with essential oils – lavender and rosemary. He read my sign (I am a Jew marching for George Floyd) and asked if I’d been to Israel. I told him no, and he responded that he’d lived there for 3 and half years, he told me that in Israel rosemary like we were smelling just then grew in enormous bushes. END_OF_DOCUMENT_TOKEN_TO_BE_REPLACED

Each month, a member of the board will share a reflection on the Soul Matters monthly theme and the state of the church. The Soul Matters theme for May is Thresholds. This month’s post is offered by Julia Antonsen.

The monthly Soul Matters theme for this month is “Thresholds”.  Hearing the word made me think of the threshold of the doors in our lives and each threshold means different things depending on when we cross it.  The threshold of the outside door as we hurried out of the cold into the house in winter.  It that same threshold we cross on the beautiful spring day with enthusiasm of the warming sun as we leave our homes, even if it is to just sit in the sun.

We cross our threshold of church where we enter with the busyness of the week with hope of seeing our friends and leave that threshold having made connections and feeling better.  Even when we enter our virtual church, it is when we chose to enter that unique place, we are crossing into community through a threshold of our devices. END_OF_DOCUMENT_TOKEN_TO_BE_REPLACED

You are welcome to come online anytime starting at 9:30 am. If you’ve never used Zoom before, we encourage you to join early. You can use most any device — a smart phone, tablet or computer.

If you’re new to Zoom or would like some extra help, we’ve created an instruction document that take you through how to install and use Zoom. If you need immediate assistance on Sunday, please text ‪(612) 486-2705‬ (and include your name). We have a UUCM Zoom tech team ready to help! 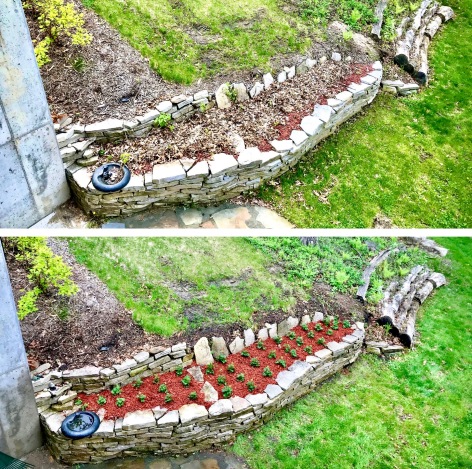 During this time of online gathering, UUCM continues to be tended and watched over by staff and members of the facilities ministry team. Continuing their annual tradition, thank you to Ben and Shelley Kyriagis for planting these lovely geraniums at the church.

Special Announcement: The Tuesday Night Book Club is now accepting nominations for the books we’ll be reading during the next year.  We meet on the second Tuesday evening each month (currently meeting online).  We’d love to have new members join us.  For more information and Zoom meeting details, contact Gary Charles. END_OF_DOCUMENT_TOKEN_TO_BE_REPLACED

Meets next ONLINE on Monday, June 15 at 11:00 AM. Please direct any questions to Bev Montgomery. New members are always welcome.

—
A Zoom meeting ID will be emailed to current participants before the meeting (see why here). New attendees: please email Bev Montgomery to request meeting details.

If you’re new to Zoom or would like some extra help, we’ve created an instruction document that takes you through how to install and use Zoom.

Meets next ONLINE on Monday, June 8 at 7:00 PM. June’s book is Inheritance: A Memoir of Genealogy, Paternity, and Love by Dani Shapiro. July’s meeting will be book selection time. If you have questions about the Women Who Read book club, please contact Christy Dachelet.

A Zoom meeting ID will be emailed to current participants before the meeting (see why here). New attendees: please email Christy Dachelet to request meeting details.

If you’re new to Zoom or would like some extra help, we’ve created an instruction document that takes you through how to install and use Zoom.

Next Sunday, May 31 at 10 AM we are celebrating our annual Blessing of the Flowers, or Flower Communion, during the worship service. Since we are unable to gather our flowers together in our sanctuary, we invite you to bring flowers to our Zoom worship. Think creatively! Zoom in from your garden or have flowers inside. You can even draw, sculpt, or paint flowers! Here is a flower coloring page to spark your creativity. Our mission is to fill our screens with a virtual garden. Please join us as we celebrate the resiliency and symbolism of the flowers!

If you have not yet completed the annual congregational survey, please do so this next week. It is very important for the board to have a good feedback set from members and friends to guide our work through the next year. Click below to take the survey. It will take approximately 15-20 minutes to complete. Thank you!